Akton Injection has been serving Montréal with radon mitigation system installation services for over the past 40 years. Daniel Surbey-Bougie would like to thank the Health Canada the Lung Association and CAA for their knowledgeable documentation on radon. Radon gas can harm your family because it is:

 The second highest cause of lung cancer

 Can only be found with testing

For radon mitigation, you can choose sub-slab depressurization.

Radon is a radioactive gas that is formed naturally by the radioactive breakdown of uranium in soil, rock, and water. It cannot be detected by the senses, i.e., it is colourless and odourless; however, it can be detected with special instruments. Radon usually escapes from the ground into outdoor air where it mixes with fresh air resulting in concentrations too low to be of concern. However, when radon enters an enclosed space, such as a building, it can accumulate to high concentrations. The only known health 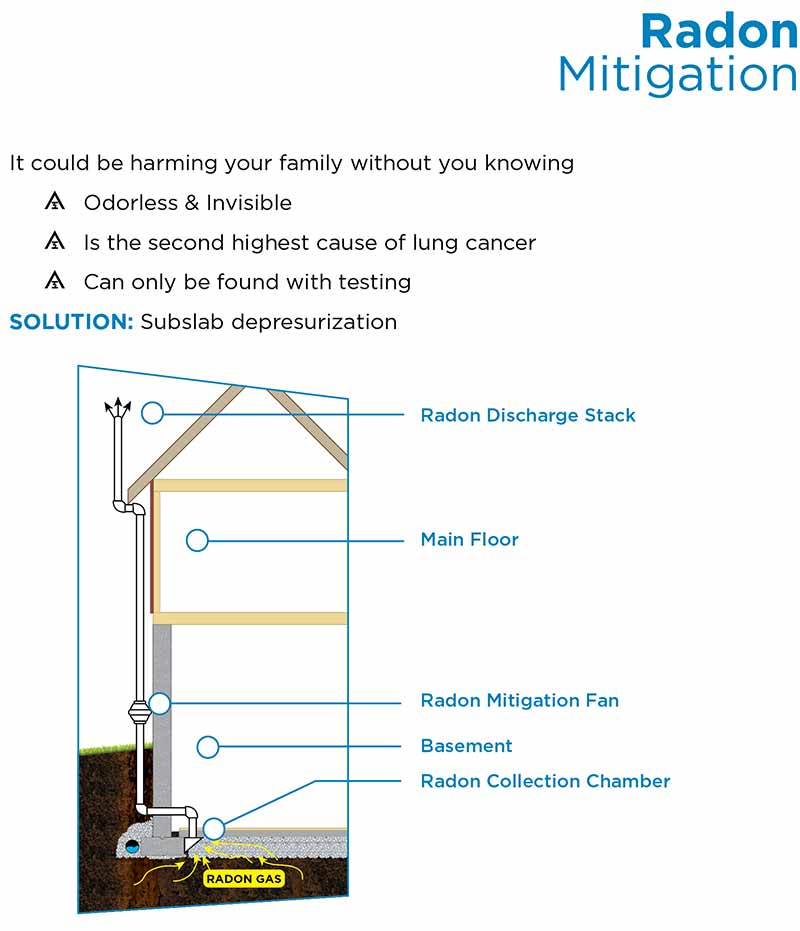 risk associated with exposure to radon is an increased risk of developing lung cancer. The level of risk depends on the concentration of radon and length of exposure. Because the source of most radon in homes is the soil on which the house or building is standing and radon which escapes from the soil and infiltrates a home tends to be heavier than air, higher indoor radon levels are more likely to exist below the third floor. For this reason, Health Canada recommends testing all homes below the third floor. In some cases, higher radon levels have been found at or above the third floor, due to radon movement through elevators or other air shafts in the building. If your apartment is at or above the third floor and you are concerned about this possibility, you could also choose to test for radon.

In the open air, the amount of radon gas is very small and harmless. However, in confined spaces like basements and underground mines, radon can accumulate to potentially harmful concentrations.

Exposure to high concentrations of radon has been associated with an increased risk of lung cancer, depending on the duration of exposure. Because it is radioactive, radon decays, producing substances called radon progeny. Two of these substances, polonium 218 and polonium 214 decay rapidly, emitting alpha particles. When these particles hit an object, their energy is absorbed on the surface thereof.

What Are the Effects on Health?

It is essentially the risk of lung cancer which controls the diligence of radon in homes. Radon is classified as a proven carcinogen in humans by the International Agency for Research on Cancer (IARC) and the Agency for Environmental Protection (EPA) of the United States. As a gas, radon enters the lungs with the air we breathe. In fact, when it decays, radon produces products called progeny or daughter products that bind to airborne particles and can then bind to the bronchi. These decay products, short life, emit themselves disintegrated, ionizing radiation called alpha particles. This radiation can damage lung cells. The radioactivity, however, that acts locally in the lungs, so it does not broadcast in the rest of the body. Exposure to radon is the second leading cause of lung cancer after smoking. It is estimated that in Quebec 10% of deaths from lung cancer are associated with exposure to radon, which represents about 430 of 4100 deaths from lung cancer diagnosed annually.

Radon exposure is not associated with:

 Other types of cancers

Call one of our representatives today or fill out our form for a free foundation repair quotation!

Get a Free Quote
Copyright Akton Injection 2020 - Legal
Created by